Alright Mainvette, 1brycel, Vito, and anyone else who can help me with my problem. I have a 73 tee top with a gap of over 1/2 inch
at the top of both of my front doors by the windshield and the front finders, and only about 1/8 of an inch or less at the bottom of the doors. I have checked the door hinges both sides their is no play at all, when the doors are shut or slightly open they line up with the body just fine. So I was told by a dif fourm that I could loosen the three bolts each side at the front of the car( the frame to bumper brackets bolts) and jack the nose up, tighten up the bolts and that should do it.
So I did just that loosened the bolts, jacked the nose up. it closed the gap to about 3/16 good enough for me and I'm happy but when I lowered the jack after tightening the bolts of course, the gap came right back to the 1/2".
I tried it a couple of times to try to figure it out, know I'm calling out the big guns. Mainevette I know you know stuff about the fire wall rivits, could it have something to do with this.1brycel I believe you had a c-3 where the whole nose lifted, maybe you got something. ( I've seen you a couple of times with your corvette club) I'm in Tampa (should of said hi maybe next time. Ok lets get this figured out. Please and thank you Bigknight
Top

Just read this today. Not sure about the C-3's with the impact fronts, but the older C-3's have shims under the radiator support, left and right where the two bolts hold the rad support to the cross member.

Thanks but the hood fits and aligns fine, If I loosen and lift up on the bumper brackets (the ones that bolt to frame)
the whole front comes up, letting the two fenders to rotate up and close the gap at the top of the door.
Top 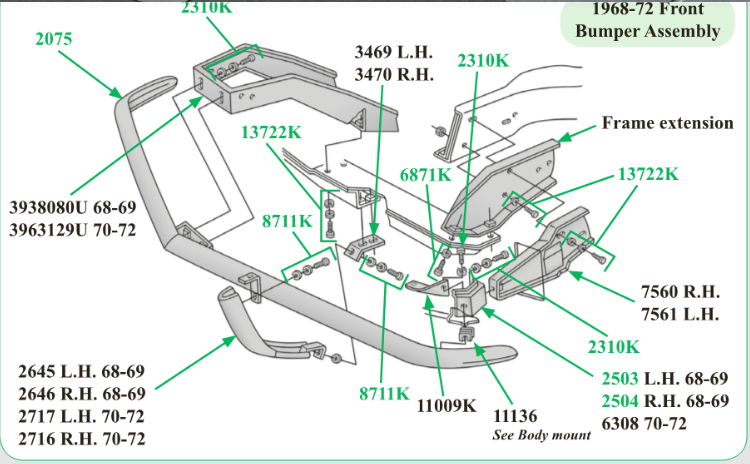 If you haven't noticed any damage I'm skeptical that anything happened between the firewall/front clip/birdcage. Any movement in those areas would mean you have significant structural damage or distress that should be readily apparent based on close inspection. You would see debonded fiberglass or large cracks/gaps between the components. Have you taken a good look at the interface areas between the birdcage and firewall, and between the front clip and firewall, to look for damage?

I'm wondering if the issue is a result of improperly shimmed, or loose, body mounts. Do you know if the car ever had a body off or had significant body work done? If so the reassembly could have been incorrect. I suggest by checking all body mounts to ensure they're properly tightened, especially #1, #2, and #3 as shown in the graphic below. 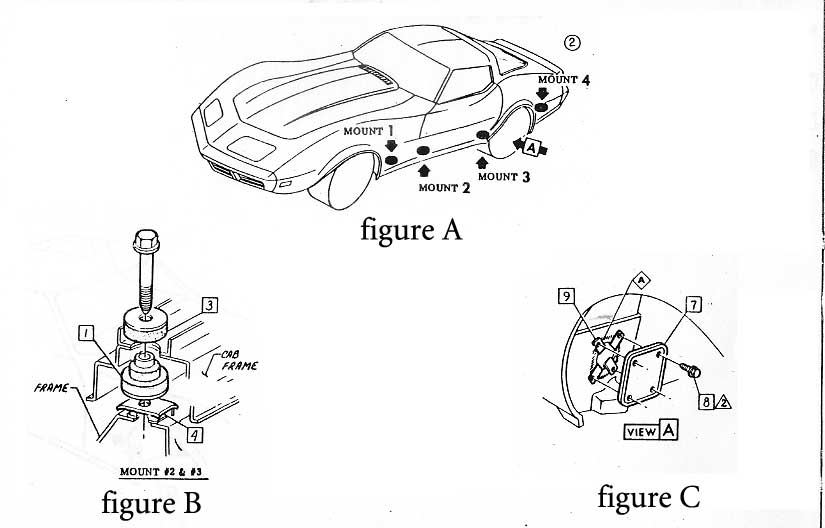 Theoretically removing shims from body mount #2, or adding shims to the surrounding mounts, could help resolve the problem. However, if the car never had an accident, and never had a body off, I'd be hesitant to mess with the shim packs at each location. They're probably correct and messing with them could cause other issues. If your car is generally original the root of the issue is likely in the front radiator support/frame extension area.

Let us know if any of this helps.
Someday I'll finally be able to drive my Vette, but for now I'll just admire all the pieces...

Track my progress at The Corvette Restoration Page http://www.corvette-restoration.com
Top

Is the door gap issue the same on both sides of the car?
Someday I'll finally be able to drive my Vette, but for now I'll just admire all the pieces...

Users browsing this forum: No registered users and 4 guests