Had a really productive weekend. I made it over to my enclosed car trailer where I was storing my new wheels and tires, brought them home and used my new pneumatic car jack to lift the car and changed out the wheels. The jack worked even better than I expected. The car sure looks better with the new wheels and tires installed in place of the "body shop junkers" that were on the car all this time. Anyone need some paint shop wheels & tires. Free, just come and get them!

The car is suppose to go over to Auto XTC this afternoon when I get out of work so they can install the carpets, but after weeks and weeks of dry weather, it looks like heavy rain may come in this afternoon. Just my luck! If it does, the move will have to wait, as the car does not have windows yet, not that I intend to ever take it out in the rain. It may come home in the rain, but if it's raining at home, that's where it stays! There is always tomorrow.

Next will come installing the front grill. I may drive it a while before I decide to install the front bumpers. Really like the looks of the car without them. Then I can start on assembling all the door windows and parts, then put on the door panels. Sure is moving along now that paint is done. I had my wife lock up all the guns in the house in case I put the first scratch on it, just to be safe!!!

I will try to take some photos before moving it to Auto XTC, as right now it is under a ton of moving blankets and bubble wrap!

Well, the car did not move yesterday as it was pouring down rain, but today looks very promising. 30% chance of rain this morning and only 10% chance this afternoon. I did use the time to prep the front grill for installation by covering the grill and the front body of the car with bubble wrap. I just need to paint a couple of unpainted stainless steel bolt heads satin black to match the rest of the behind of grill equipment. Also, did a test fit of the new console cover and re-installed the transmission shifter.

Hopefully the car will be in the shop by 5:00 today for carpets. Plan on taking some photos once I uncover the car to drive it over to Auto XTC.

After I got home from work, started the car to take it to the upholstery shop and it ran like crap!

Would not idle and kept stalling. After a short while, it started to idle, but would bog down a lot when I gave it gas. I thought it might be the settings in the FI computer, as it is a self learning system that I can make my own adjustments to, and the car has only been driven in and out of garages for a long time.

Once it started running in an acceptable manner, we left to take it to the shop. Since it was pretty low on fuel and I didn't want to run out, I stopped off and bought 5 gallons of fresh 93 octane gas. When I started it up after fueling, WOW the difference. The bigger part of the problem may have been the gas in the tank. It's not ethanol, but it is 5-6 months old, since I put the car in the body shop in mid November and got it back in early May.

From there to the shop, it ran like a Vette should run. Idled great, no bogging when pulling out, and on one stretch of road just before the shop, I let her stretch her legs, and she really did! They knew I was coming! Nothing like the midyear side pipes to get your attention!

So it's there now and I heard from the glass installer, looks like next week for the glass to be installed. In my rush, forgot to take pictures, but plenty of time for that. This way I can take pictures of the interior as well.

Now that the garage is empty again, back to cleaning and reorganizing it.

Looks like the Vette will be in the upholstery shop over the holiday weekend and all of next week. Waiting on the floor insulation to arrive. No problem for me though, plenty to do. Should take a day to clean and organize the garage, then I plan on going over to my Dad's place where the '68 Vette is and work on the tilt nose alignment and a last check to see if the engine will fit under the nose without any modifications. Sure hope so. I really don't see why it shouldn't. It is a stock big block under a slightly higher than stock big block hood. Not the 435 hp hood, but the stock big block hood. I can take measurements, but the only real test will be putting the engine in and closing the hood!

I might even get a little range time in. It's been a while since we have been target shooting. I have a new black powder rifle and a new crossbow I bought this year and I have never even shot yet.

How is the weight of the rifle? I couldn't imagine shooting a rifle that is over 5 feet long. Enjoy.
Top

How is the weight of the rifle? I couldn't imagine shooting a rifle that is over 5 feet long. Enjoy.

Actually, this black powder rifle is a modern in-line type. It has a 28" long barrel and weighs less than a regular hunting rifle. They still use black powder and are loaded from the muzzle end just like the old ones, but are far more accurate than the old black powder rifles. I do also have 2 "primitive" type black powder rifles, one is a flint lock and the other is a percussion cap style. Those have almost 5' barrel lengths, but they only weigh a fraction of what you would think. They are all barrel and not much more. They do not have the large heavy stock, the magazine, the large bolt & receiver and the extremely strong breech and barrel as the modern hunting rifles. The major difference is the type of powder they use. Black powder is only a fraction as powerful as modern smokeless powder. In fact, if you charged a black powder gun with half the powder charge using modern powder, it would blow up in your face.
Top

I haven't made any progress on the Corvette this weekend, as the car is still in the upholstery shop. Did make a lot of progress cleaning and organizing the garage without a car in it though. It was great here on Saturday, the day our club's Corvette show would have been if not for the virus, but it has rained ever since, and looks like rain for a few more days as well. At least I get to relax a bit over the long weekend.

I delivered the side pipe covers to the guy who polished the grill and license plate housing. He did such a good job on them, I decided to let the expert polish this as well. Also, since I have been fortunate that I have been working steady during the whole virus shutdown, I don't mind giving others some work. Even though a lot of these shops are still open, many of their customers are out of work and can't afford to have things done. So I get a better job and they get some income as well.
Top

I got a phone call from the metal polisher that the side pipe covers are polished an ready for pickup. He said they came out far better than new! Picking them up tomorrow morning. Can't wait to see them!

Still waiting on the glass guys though. Hope they call Monday. It would be nice to have the glass in when I drive it home from the upholstery shop. Re-assembly is sure taking longer than I thought it would!

Working on the '68 this weekend. Weather looks good for it.

Work is progressing on the carpet install with two changes to my plans. Not unexpected for the way things have gone with this car so far!

First, I as I said before, I decided not to use the jute carpet padding that came with the car, as it was not in the greatest condition and I know what jute is like if it ever gets wet. Plus, when we went to fit the jute padding, it fit like crap. We ordered two rolls of the really good underlayment (I think it is called Dynamat) to install instead. It took a few days to get, and it is taking longer than I thought to install, but John is doing a REALLY nice job of it.

After cleaning the compartment really well he painted the floor and rear compartment with primer so the glue would stick really well. Next he routed all the wiring so it was as concealed as possible. Then he cut paper patterns and cut the Dynamat so it fit with NO open spaces. After gluing it in, he covered every seam with aluminum duct tape. 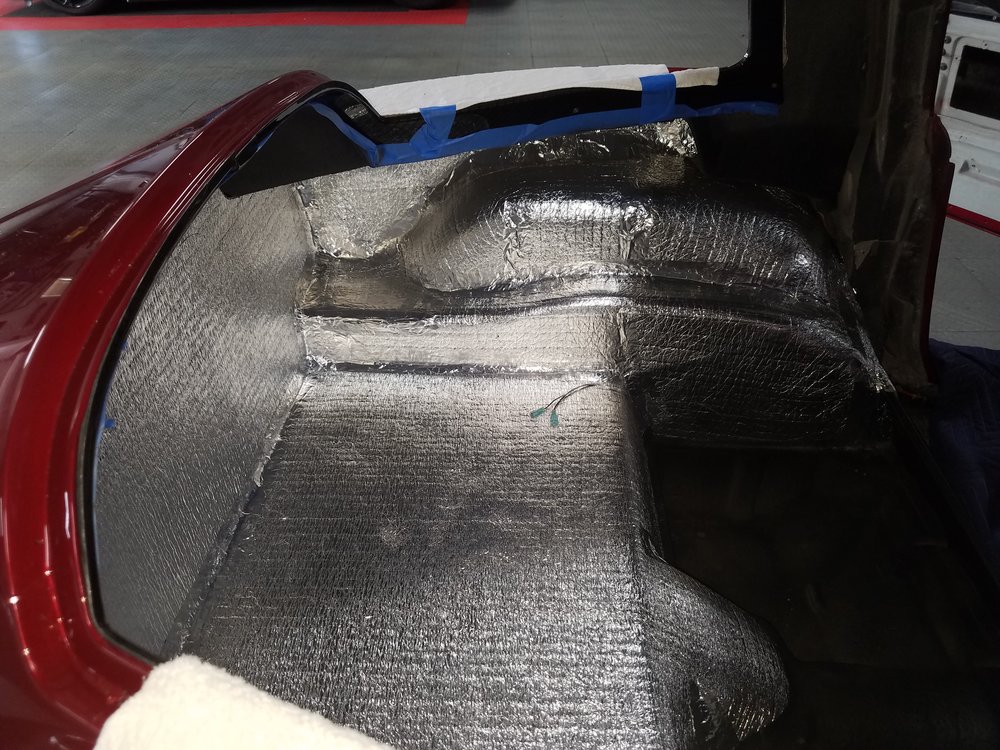 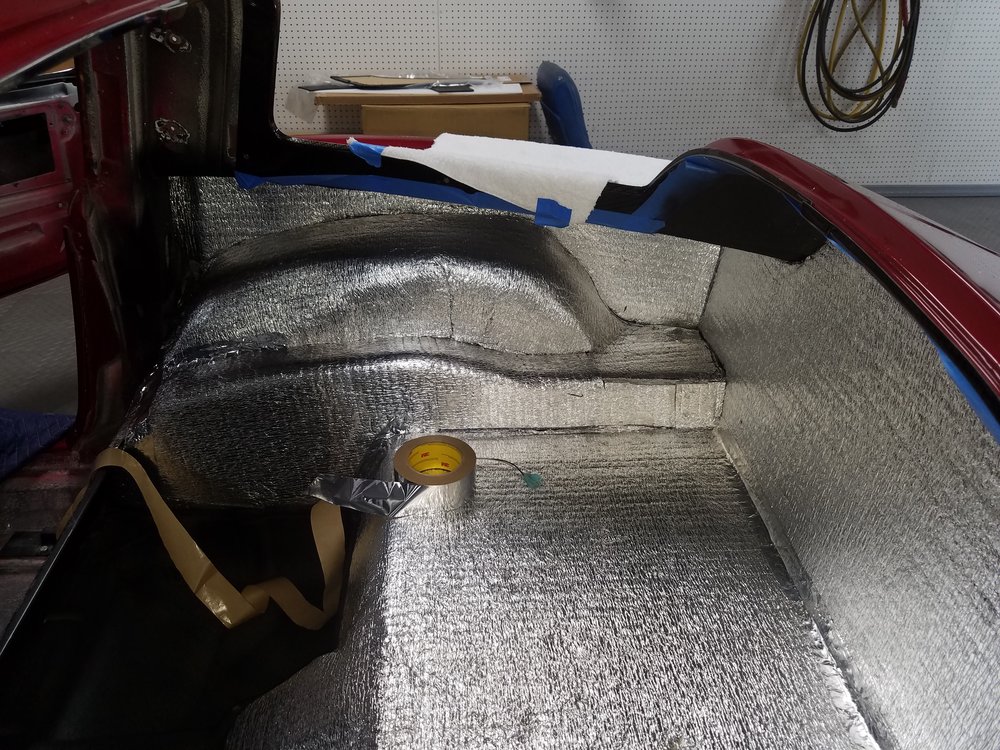 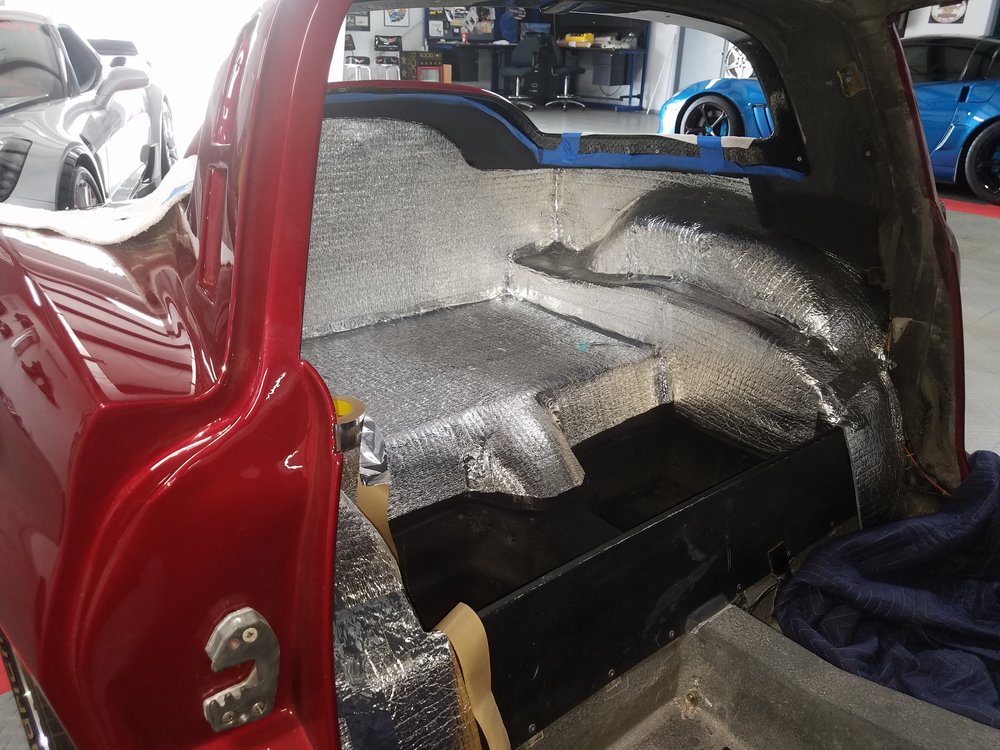 With all of this, along with the Lizard Skin ceramic insulation and sound deadener I had already installed, this should be a really cool and comfortable and quiet car to ride in. The rear compartment is about done, and the front should go faster.

Then I looked at the carpets the seller provided, and upon a close examination, they actually looked like they had been installed before (somewhere). Not glued in, but not new or in perfect condition either. There were a couple of spots that showed possible wear marks on the underside that new carpets should not have.

Based on that, I ordered a complete new set of carpets. After all I have gone through, I'm not going cheap now and installing junk carpets, only to have to rip them out later, destroying most of the Dynamat and buying new carpets anyhow. They should be here early next week. Just more time to clean and organize the garage.

What glue do you plan on using for the carpet to insulation? The 3M spray did didn't work as expected.

Any advice on prepping the center console for painting? I took the green scuffing pad already.

Users browsing this forum: No registered users and 8 guests